The integration of NRU in the Neuroscience Centre at Rigshospitalet creates a unique platform for multimodal clinical research in brain disorders (Figure 1). With the fusion of Glostrup Hospital and Rigshospitalet patients are recruited from the largest neurological department in Scandinavia and the Department of Neurosurgery performs the largest number of brain operations in Northern Europe. A large potential exists for a sophisticated use and integration of the imaging modalities, clinical data (psychology, psychiatry and neurology) and biological markers to improve the basic understanding of the pathophysiology of neurological and neurosurgical disease and to improve diagnosis, monitoring of treatment effects and failures, and for making prediction of outcome and prognosis. 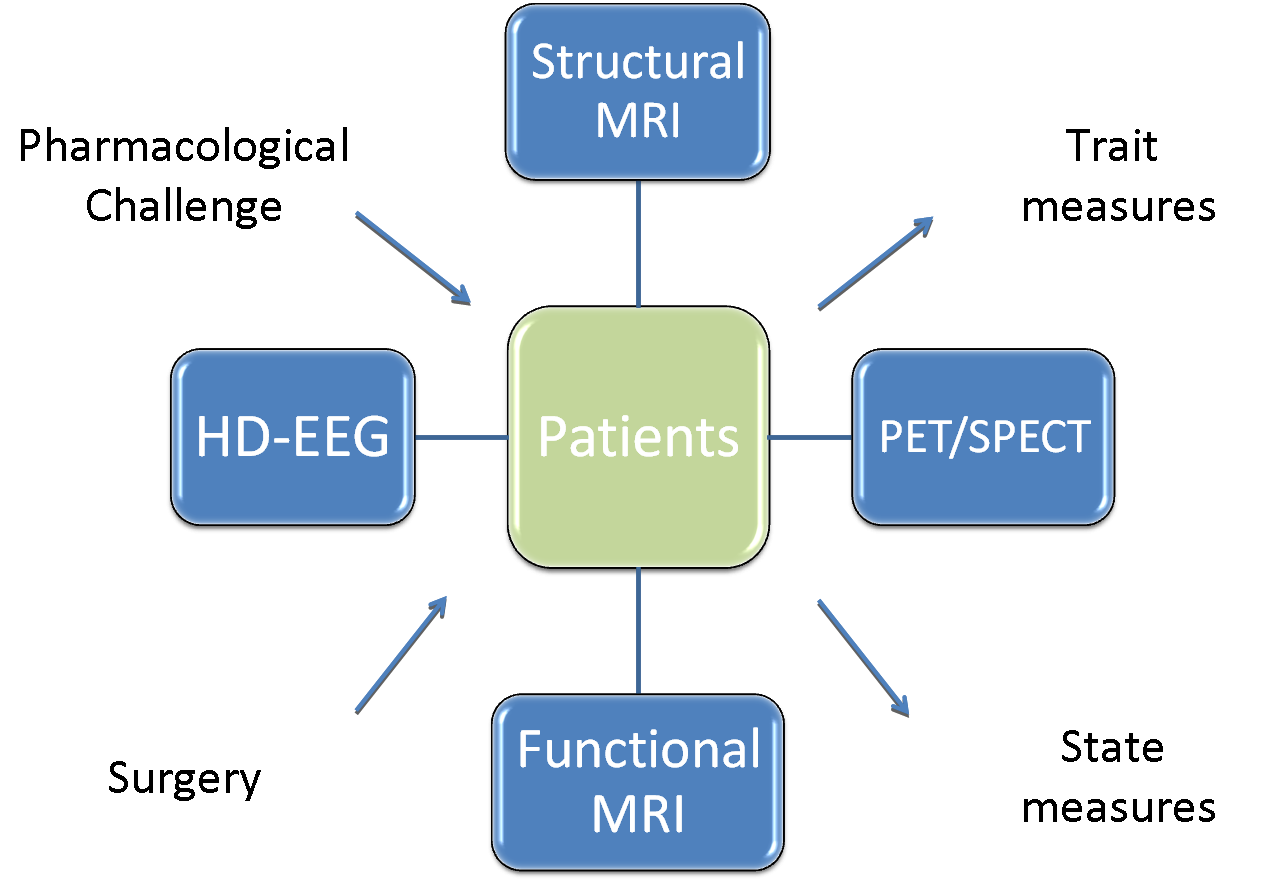 Epilepsy affects 40-50.000 people in Denmark and is associated with major comorbidities including mood disorders and cognitive dysfunction. About 30% of patients continue to have seizures despite antiepileptic drug therapy. The cost attributable to epilepsy in Europe exceeds € 14 billion per year. Patients with medically intractable epilepsy with a focal start in the brain are possible candidates for epilepsy surgery. In Denmark epilepsy surgery is centralized at Rigshospitalet, and annually approximately 100 patients are evaluated here and at the Epilepsy Hospital Filadelfia in Dianalund. The implementation and integration of multimodal functional imaging techniques in the diagnostic workup of epilepsy surgery candidates is key for stepping forward both with respect to the number of patients we can offer surgery and the number of patients that surgery render free of disabling seizures. NRU is involved in several research initiatives using functional and structural imaging techniques and new imaging software to locate the epileptogenic zone in individual and understand the functional consequences of seizures. Studies include the use 256 channel EEG system in combination with fMRI, advanced MRI techniques and new algorithms aiming at automatic detection of focal epileptogenic lesions in the brain not visible to the human eye. In order to detect the relative contribution of functional and structural imaging data, clinical data and biochemical markers on epilepsy surgery outcome, NRU is leading initiatives to analyze historical epilepsy surgery data and design a new prospective database for patients enrolled in the Danish Epilepsy surgery program

Stroke is a leading cause of death and disability. NRU is conducting longitudinal studies in patients during stroke rehabilitation 1-2, 5-6 and 16-18 weeks after cerebral infarction (Figure 2). We are interested in the relation between structural and functional MRI parameters, [123I]CLINDE-SPECT and clinical test scores. [123I]CLINDE binds to the translocator 18kDa protein (TSPO). In the brain TSPO binding sites are increased on activated microglia and used as a marker of regional neuroinflammation. The role of neuroinflammation during stroke is largely unknown. Feng et al.[2] described the [123I]CLINDE-SPECT method for human studies and further methodological studies are conducted to develop a quantitative method feasible for clinical studies. The clinical study is performed in collaboration with the Department of Neurology at Bispebjerg Hospital and the MR-department at Rigshospitalet.

Autoimmune encephalitis with antibodies against neuronal surface and receptor antigens has been increasingly diagnosed in recent years. If treated efficiently and early these conditions often have a good response to immunotherapy. NRU used [123I]CLINDE-SPECT to detect widespread microglial activation and “Brain on Fire” (from the book of Susannah Cahalan) in the acute phase of anti-NMDA receptor encephalitis and the effect of immune therapy (Figure 3). The image was published in Neurology in February 2015 [3]. We recently started a project together with Danish Multiple Sclerosis Center testing the effect of immune therapy on [123I]CLINDE binding in the brains of patients with multiple sclerosis. 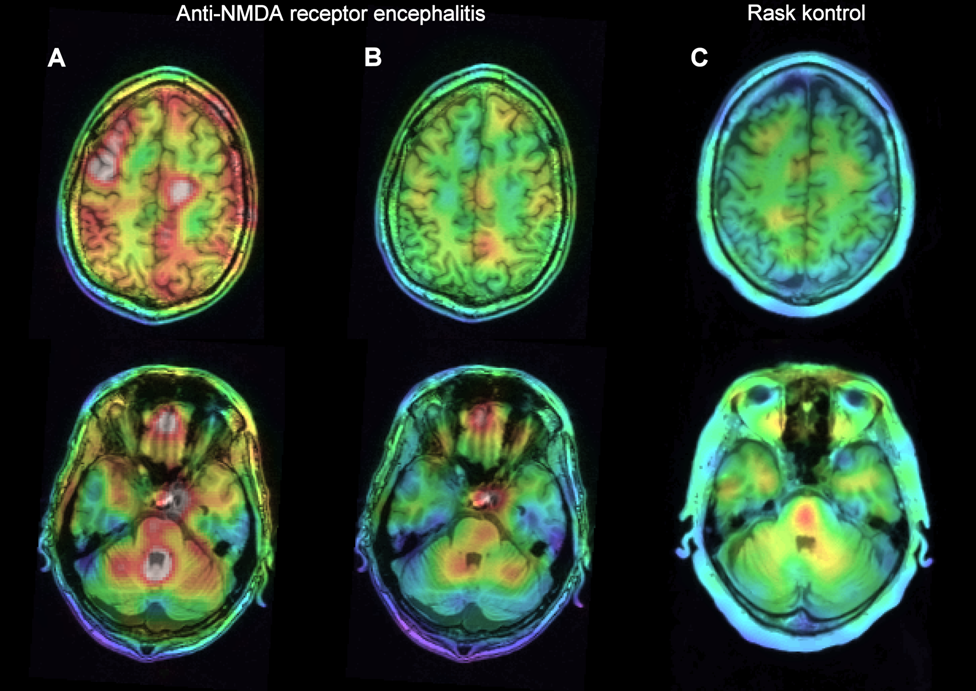 Figure 3: [123I]CLINDE and co-registered MRI in a patient with severe psychiatric and neurological symptoms and findings in CSF consistent with anti-NMDA receptor encephalitis (A, B). There is a pronounced neuroinflammation in the brain before starting treatment with plasma separation and methylprednisolone (A). The scan almost normalized after 6 weeks of treatment (B) compared to a healthy control person (C). The patient was at that time started to work again.

Glioblastoma multiforme (GBM) remains the most common and aggressive primary tumor of the CNS. With conventional radiotherapy, chemotherapy and debulking surgery mean survival from diagnosis is 14.6 months. Glioblastoma cells express TSPO and we hypothesized that [123I]CLINDE-SPECT may be used as a marker of tumor cell proliferation. In a small series of GBM patients we demonstrated (Figure 4) that areas of increased TSPO appeared to be a better predictor of tumor progression on contrast enhanced structural imaging at follow up than [18F]FET-PET and Gd-MRI at baseline [4]. This observation has possible implications for planning surgery, radiotherapy and to monitor the effect of oncological therapy. However, further studies are warranted to determine the exact role of TSPO imaging compared to well documented modalities like imaging of amino acid transporters and MRI. The study was performed in collaboration with the Department of Neurosurgery and the PET & Cyclotron Unit at Rigshospitalet.

Dopamine transporter imaging using SPECT and [123I]PE2I and later [123I]FP-CIT in patients with parkinsonism has been a research area of NRU for years. Studies in typical and atypical parkinsonism has been conducted with the Department of Neurology at Bispebjerg Hospital and studies in dementia with Lewy bodies with the Memory Clinic at Rigshospitalet. Most recently NRU has contributed to studies describing the role of the dopamine transporter in neurological disorders with parkinsonism caused by mutations in specific genes [5,6].

Migraine is the most frequent neurological disorder with a worldwide prevalence of about 15%, and it ranks as the seventh most disabling of all diseases. The pathophysiology behind migraine is enormously complex and, despite several decades of research, yet not completely clarified. In collaboration with the Danish Headache Centre at Rigshospitalet, Glostrup, NRU is currently involved in a project investigating whether healthy subjects and individuals with migraine without aura show differences in their brain's serotonin level and differences in the characteristics and the distribution of a specific serotonin receptor, i.e. the 5-HT1B receptor.