The research focus of the data analysis group is development and optimization of sophisticated data analysis methods for PET, MRI and SPECT images of the brain.

The group is involved in several projects:

Below you can read more about the projects that we are currently running:

Responsible: Martin Schain
In this research project, we seek to develop a methodological framework for using simultaneous PET-MR imaging to study the interaction of drugs in the human brain. Whereas PET enables determination of whether, and the extent by which, a drug occupies a receptor, fMRI provides information about resulting hemodynamic response. By measuring and analyzing these two signals in parallel, the relationship between neurochemical interactions and neurovascular coupling can be explored. To accomplish this, we develop mathematical models that describe the interaction of a drug in a living brain, and validate these models using realistic simulations as well as real simultaneous PET-MR data.

Responsible: Gjertrud Laurell
Developing drugs for treatment of brain disorders is a challenging, time consuming and costly process. PET neuroimaging has emerged as a useful tool for investigating the interactions between a drug and its target receptor in the human brain. The set-up of a typical PET occupancy study is illustrated in figure X. Several PET scans are performed, one at baseline and subsequent scans after administration of the drug at various doses. The available methods for analyzing the data consists of a series of simple linear regression analysis techniques (the Lassen plot), followed by non-linear regression (dose-occupancy response curve). There are several shortcomings associated with this approach, including biased estimates and an inability to account for measurement errors.

We aim to improve the analysis of PET occupancy data by estimating non-displaceable binding (VND), maximum occupancy, and the dissociation constant of the drug (KD) in a one-step maximum likelihood approach, where data from all scans is evaluated simultaneously. Maximum likelihood estimation can readily accommodate measurement errors in any observation and is guaranteed to provide asymptotically unbiased estimates of all parameters of interest. 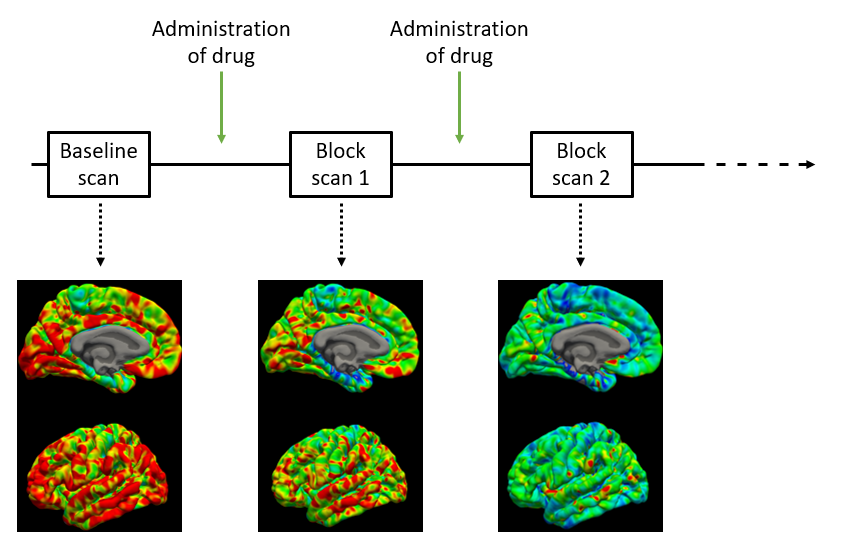 Figure 1: Schematic illustration of a PET occupancy study. The subject is scanned at baseline (occupancy = 0), and again after administration of increasing doses of a drug binding to the same target as the radiotracer.

Creation of a high resolution human PET atlas of the serotonin binding in the human brain:

Responsible: Vincent Beliveau
The serotonin (5­-HT) system is highly diverse with 7 families of receptors (5­HT1 to 5­HT7), including 14 subtypes, and a transporter. Serotonin is implicated in a myriad of brain functions and dysfunction of this system is linked to many disorders. Over the years and especially as part of the work done in the Center for Integrated Molecular and Brain Imaging (Cimbi), we have at NRU extensively studied the 5-­HT system and has accumulated a rich and unique database of healthy subjects including high ­resolution structural MRI and PET images targeting the receptors 5­-HT1A, 5­-HT1B, 5-­HT2A (agonist and antagonist) and 5-­HT4, and the transporter 5-­HTT. These receptors and the transporter represent the major components of the 5­-HT system that can be studied with PET neuroimaging. In this project we have by means of a novel pipeline for surface-based analysis developed within FreeSurfer generated a high resolution atlas (Figure 2) of the cerebral 5-­HT receptors and transporter distribution in a healthy population, to be offered to the scientific community.

Responsible: Martin Nørgaard
Seasonal Affective Disorder (SAD) is a severe season-specific type of depression, affecting up to 5% of Copenhagen inhabitants during wintertime. In the human brain, SAD manifests itself as a mental condition characterized by a phasic occurrence of major depression during wintertime and with subsequent remission in summertime. It is, in part, hypothesized to be triggered by a seasonal misregulation of the serotonin transporter (SERT), the mechanism in which endogenous serotonin (5-HT) is inactivated and recycled into the presynaptic terminal. SERT-levels can be measured with PET imaging and modeled using the 2-step multilinear reference tissue model (MRTM2). However, in neuroimaging data processing choices influence the achieved results and their interpretation heavily. Furthermore, the statistical challenges associated with analyzing neuroimaging data are far from solved, and the adaption of advanced statistical strategies to neuroimaging data constitutes a significant problem. The aim of this project was therefore to employ a variety of statistical and computational analyses (Figure 3) to allow for inference on the complex SERT modulation underpinning SAD. 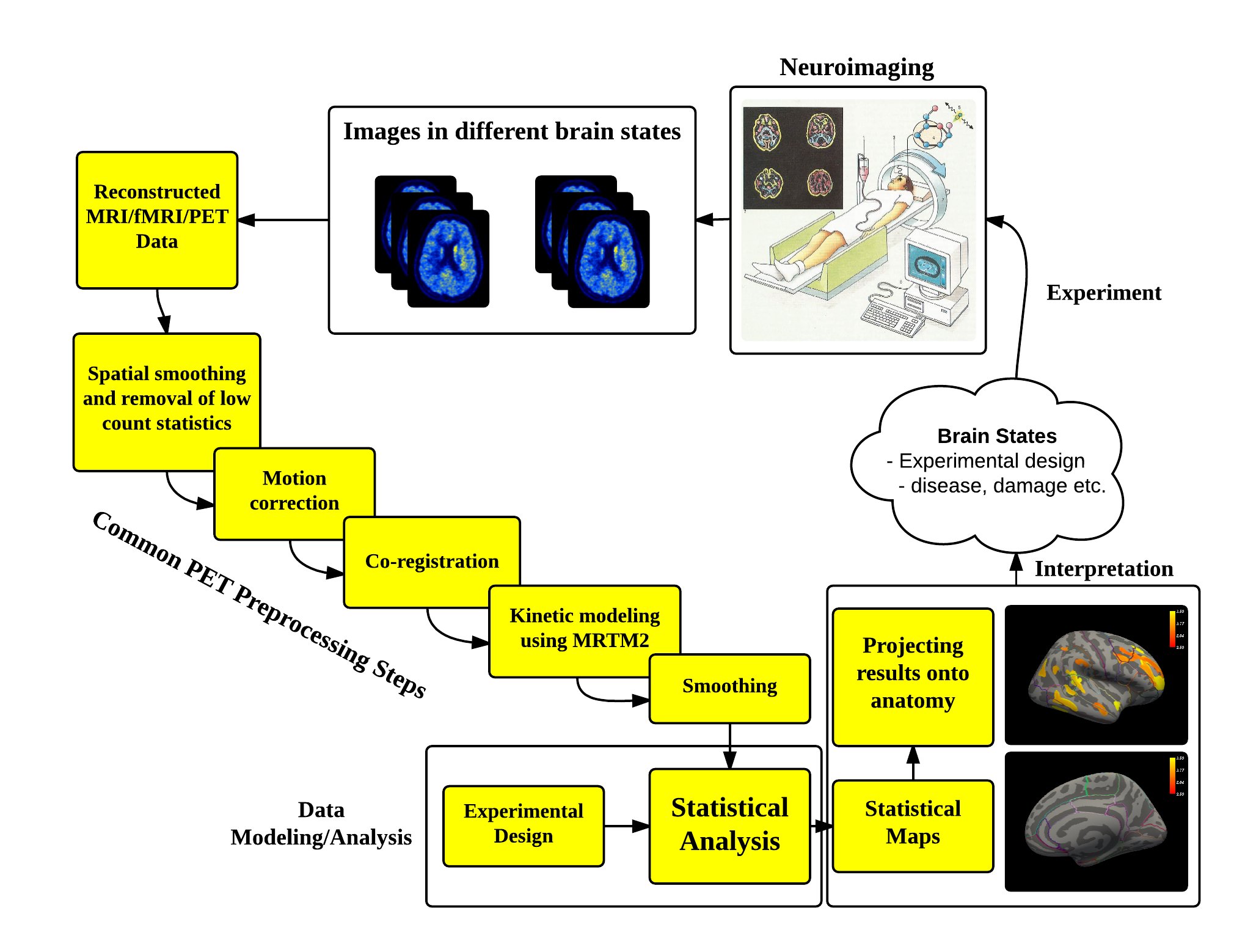 How can you avoid to put children with cerebral palsy in general anesthesia while they are in a brain scanner?

Responsible: Melanie Ganz
It is standard procedure in Danish hospitals to employ general anesthesia when small children (< 8-10 years) are in need of medical imaging procedures, such as an MRI. The anesthesia reduces motion artefacts and is useful when dealing with anxious children. Although complications directly related to general anesthesia are rare, there is an increasing concern about the potential neurotoxic effects of general anesthesia. Additionally, there are logistic and financial challenges associated with the use of general anesthesia.
We want to test the clinical efficacy a new approach of imaging children, including preparation and training and introducing a novel marker-less motion tracking device “Tracoline” that can register children’s movements while scanning. This device allows for motion correction of the acquired images and we wish to demonstrate its efficacy in children with Cerebral Palsy (CP) that undergo MRI scans for diagnostic purposes. While we have chosen to focus the clinical trial on children with CP, the test results will be transferable to other populations. How the new “Tracoline” system is functioning during MR scanning is illustrated in Figure 4.

Figure 4: (Upper panel) Tracoline by TracInnovations - The current prototype (Tracoline 2.0) with user-friendly software packages shows the basic workflow. (Lower panel) Protype setup on the mMR Siemens Biograph at Rigshospitalet, Copenhagen. Tracoline 2.0 surface tracking system with a volunteer inside the standard head coil of the Siemens Biograph is shown in (a). The image in (b) depicts a corresponding high quality surface frame of the volunteer.

Effects of sleep deprivation and adrenergic inhibition on glymphatic flow in humans:

Responsible: Sebastian Holst
Sleep is a universal biological process critical to maintenance of life. Lack of or insufficient sleep, has been associated with a range of diseases including obesity, cardiovascular disease, reduced cognition, impaired learning, and increased risk of motor vehicle accidents. Although advances in our understanding for why we sleep have been reached in recent years, the underlying biological mechanisms remain poorly understood. The glymphatic system is a novel macroscopic pathway of the central nervous system, so far only described in rodents. This system facilitates the clearance of waste products from neuronal metabolism in the brain, preparing the brain to be awake. Fascinatingly, the glymphatic system is specifically activated during sleep and enhanced by up to 90% when compared to wakefulness. In this project (Figure 5), we aim to demonstrate the existence of the glymphatic system and measure glymphatic flow in the human brain. With newly developed magnetic resonance imaging (MRI) protocols such as ultra-fast magnetic resonance encephalography (MREG), we aim to investigate, and pharmacologically interfere with, the glymphatic system in healthy adult volunteers at various levels of sleep need.

Figure 5: Sleep and its fluctuations across the night (left) will be investigated following a pharmacological intervention and during a 2-hour simultaneous EEG/MRI measurement (right) at different levels of sleep loss. Preliminary data in three individuals are shown (bottom right).

Responsible: Claus Svarer
In most animal studies only the functional data is available and it is common practice to manually delineate regions of interest at the functional datasets and use these regions for e.g. extraction of time activity curves that can be used for quantification of binding from PET datasets. In this project we are working on development of a more objective automatic method for automatic delineation of the regions of interest (Figure 6). In the new method it will both be possible to base the delineation of regions of interest on a structural MRI dataset or directly at a functional PET imaging dataset. An atlas for the Danish landrace pig will be made available. 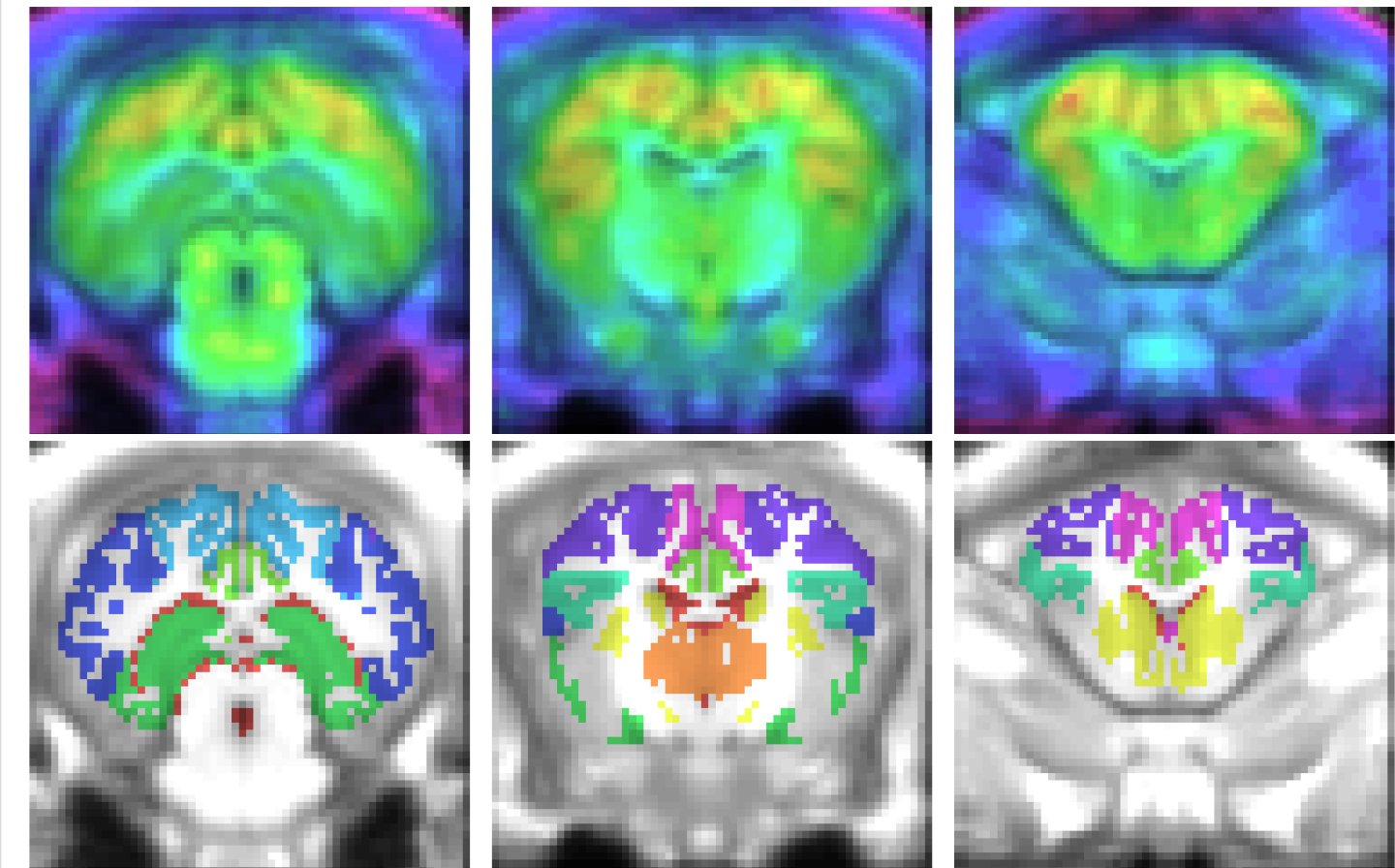 Responsible: Giske Opheim
Epilepsy is a prevalent neurological disorder associated with many different seizure types. About one third of epilepsy patients suffer from disabling seizures despite being given the currently optimal anti-epileptic drugs. These patients may be candidates for surgical resection of the lesion responsible for their seizures. To date, visualizing such lesions on 3T MR images (MRI) is the most important correlate to surgery success even though it only being possible to identify the lesion in about 50% of the cases averaged across epilepsy subtypes. In this project the clinical impact of sub-millimetre resolution images from 7T MR in evaluation of epilepsy surgical candidacy is evaluated. Further, we try to apply several machine learning techniques in order to classify structural and functional lesion characteristics automatically on both 3T and 7T MRI. Our aim is to aid the multi-disciplinary clinical evaluation by increasing lesion detection rates with higher accuracy and in our future scope, to predict treatment outcome. 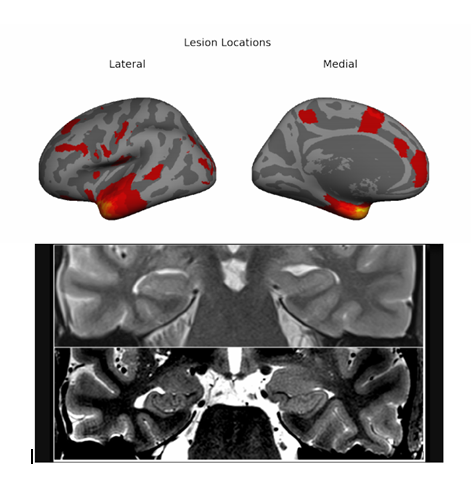 Figure 7: (a) Distributions of focal cortical dysplasia lesions in a patient cohort who have undergone surgery with histopathological verifications and >1 year-follow-up. The lesion masks are delineated based on surgical resections – only 40% of these cases were found during visual radiological assessment. The lesions represent regions with abnormal imaging features, such as blurring and atypical curvature. (b) A coronal cross-section of the hippocampus in a patient where there was doubt regarding hippocampal as a seizure focus, and radiology and morphometry findings from 7T MR helped clear the suspicion. The difference in resolutions on 3T (top) and 7T (bottom) MRI is easy to spot even for non-trained personnel.

Responsible: Brice Ozenne
Data collected in neuroscience typically involve a variety of measurements (e.g. fMRI, PET, EEG, psychological questionnaires, blood tests), possibly performed repeatedly over time and space (e.g. brain regions). Simple statistical methods are not well suited to that case and we have been developing Latent Variable Models (LVMs, see Figure 8 for an example) to estimate relationships between variables in a more efficient and interpretable way. Acquiring medical images is costly and investigators typically would like to answer several research questions with a limited sample size. We have therefore also developed a statistical inference framework adapted to small samples and efficient methods to adjust for multiple comparisons in LVMs. Future projects involve:
- How to model the relation between short-term changes in brain/psychology with long-term outcomes (e.g. death)? This would involve extending the current LVM framework to time-to-event endpoints and the associated (censoring, competing risk).
- What is the impact and how to integrate processing steps such as the definition of the Region of Interests (ROIs)? We are in particular interested in how one can use a single dataset to (i) efficiently identify the ROIs (Figure 9) and (ii) perform a statistical analysis on these ROIs (e.g. to assess a group difference) while still controlling the type 1 error at its nominal level.

Figure 9: Comparison between the signal in two groups at the voxel level, using a t-test at each voxel (middle panel) or only at voxels with a signal greater than a pre-defined value (right panel). The green dots refer to the voxels where a significant difference is identified.

Responsible: Pontus Plavén-Sigray
In this project we aim to estimate the variance of PET outcomes measures, such as total distribution volume or binding potential. The goal is to apply the bootstrap procedure to all data sources from a full PET examination, and assess the impact of measurement errors stemming from the blood, metabolization and brain signal. Accurate estimate of variance will allow us to weigh individual outcomes when performing statistical inference, such as case-control studies, to increase precision and power in clinical PET studies.

Figure 10: Example of bootstraps of the striatum region of interest time-activity curve (left) and parent fraction of radioligand in plasma over time (right) for the radioligand [11C]PBR28. 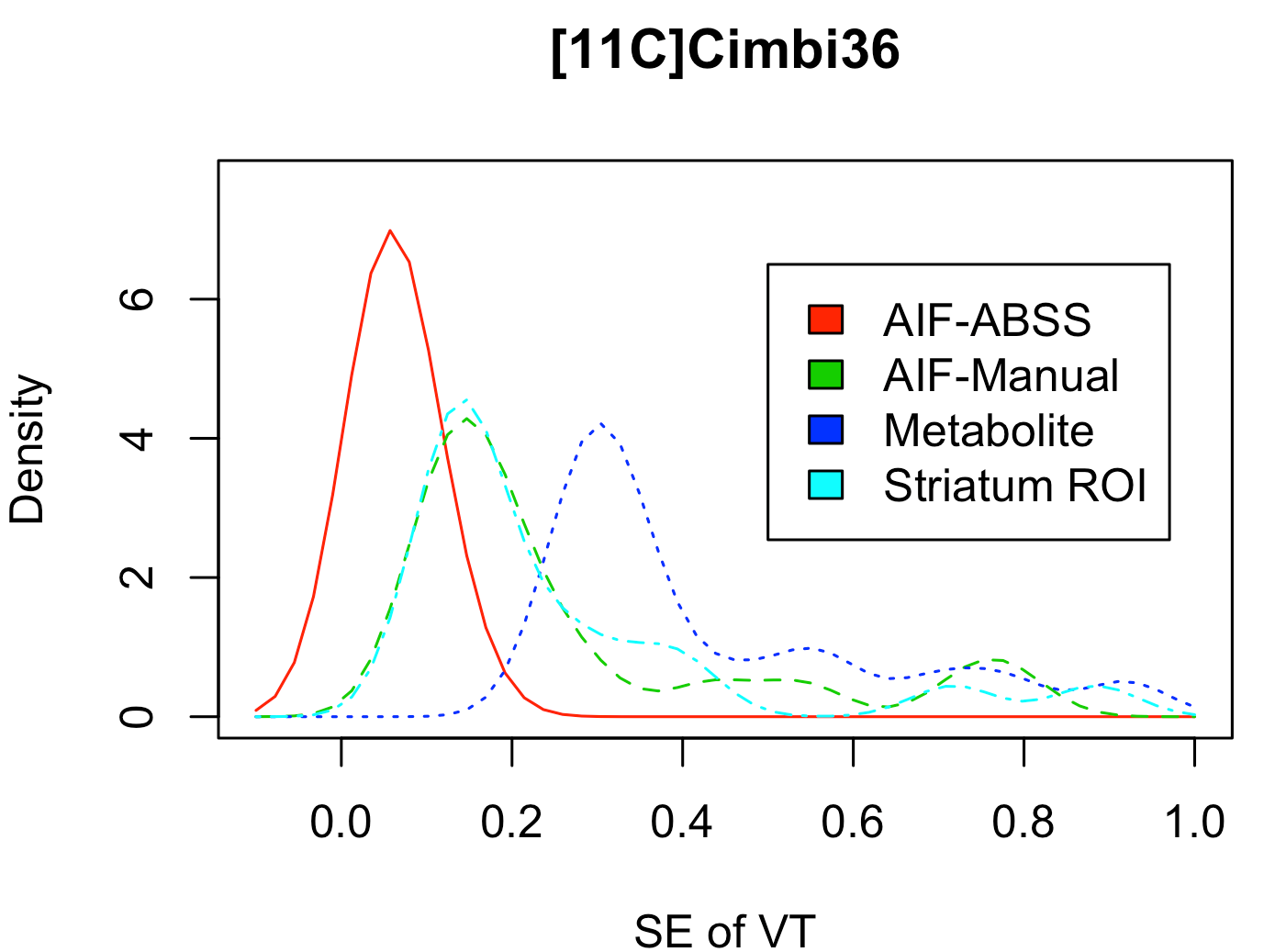 Figure 11: Variance of total distribution volume (VT) stemming from different sources of data in a PET examination using [11C]Cimbi36. For this radioligand the metabolite analysis (parent fraction data) contributes with the most uncertainty around VT.